Thanks to a technical glitch (there's a reason for the name of this occasional blog) the irregular newsletter where I send out details of new releases, book signings, and the odd piece of publishing news, has died.

It is no more.

It has ceased to be.

But unlike the infamous Norwegian Blue it is being resurrected.

Shadows on the grass - Misha Herwin 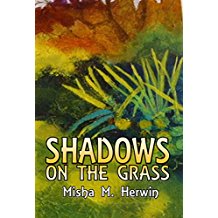 “Shadows on the Grass” came out as an e-book in January and after the first flurry of excitement, there’s time now to sit back and reflect on the whole process.

This book has taken many, many years to write. Not because I am a slow writer, quite the opposite in fact, but because it started out life in a very different form.

Back in the day I was interested in writing historical novels, I was also, at more or less the same time, researching my family history.

My parents came to England after WW2 and settled in a country that was totally foreign to them. Because at that time Poland was behind the Iron Curtain they had very little contact with any of their relatives and neither did we. Curious to know more I began asking questions and listening to the stories my mother told about her childhood.

Some of this material was incorporated in the original version of “Shadows on the Grass” a long shambling novel that had no real centre, or any particular theme. I remember finishing it one snowy December day and rewarding myself with a glass of vodka, then putting the manuscript away in the box along with all the research I had done on Polish history.

Of course what I should have done was to get feedback and start on the next draft, but somehow I had lost impetus. Life got in the way and it wasn’t until some years later that I took it out again, decided there was something in what I had written and decided to give it another go.

The first thing that went was the structure. Instead of following a chronological narrative, I went for a series of flash backs so that the story of the Dzierzanowski family would be told through the view point of three main characters. Grandmother, mother and daughter. And so a theme emerged, the relationship between the three of them became the focus of the book.

In nineteen sixties Bristol seventeen year old Kate is torn between the new sexual freedom and her rigid Catholic upbringing. Her parents have high expectations of her; she however is determined to lead her own life.

Mimi her grandmother is dying. In her final hours, her cousin the princess keeps watch at her bedside.  Born in the same month in the same year, the two women are bound by their past and a terrible betrayal.

Meanwhile, caught between the generations, Hannah Mimi’s daughter struggles to come to come to terms with her relationship with her mother and to keep the peace between her daughter and her husband.

She too must find her own way in this foreign land in a new post war world, where the old certainties have gone and everything she knows has been swept away.

Thanks Steve for hosting me on your blog. If you would like a copy of “Shadows on the Grass” here’s the Amazon LINK

Writing is an odd thing.  Most people think it’s a solitary activity, but is it really?
It does, at first glance look that way, and writers do spend a lot of time working alone.  At least I do.  Our distinguished host on this blog, Steve Lockley spends a fair amount of his time working with others, Paul Lewis and Steve Savile to name but two. Such collaboration is actually rare - at least, in comparison to the number of writers who write alone.
Writing is a process that starts with a story idea, usually in one person’s head.  It usually involves a computer somewhere along the line where one person sits and types. Then an editor, probably also sitting alone with a computer somewhere, rips it up and sends back to the writer telling them all the things that are wrong with it.  After that, there are tears and wine and rewrites.  Then more rewrites.  Funny that the re-writing feels like it takes so much longer than the initial writing.  Then there’s copy editing and proofreading still to do before publication.
A writer can write, but no book should ever get into the hands of a reader without the work and effort of an editor. Have to say I don’t think my stuff would ever have been published without the hard work my editor puts in, the slaps around the head for the bad stuff and the sharper ones telling me to see that there are good bits too.
Then there’s the cover.  All books need a cover, even those that will never be printed. Like it or not the cover will help or hinder the book being sold.  It’s a creative element that needs to be right; people do judge a book by its cover.  It is very unusual that the writer actually designs the cover, that’s usually the province of a very different kind of creative.  I’ve sent out briefs for cover designs and had a couple where I’ve wondered how the result in any way related to what I wrote, where they really don’t relate, then I ask for changes to be made.  I’m happy with the covers my name is on.
Working with a publisher also helps with that too.  They have their own processes for creating a book, content and cover.  Then they do the marketing too.  Many an author does the whole kit and caboodle of marketing themselves, I don’t because that’s not the way my brain works, but even I know I have to put the effort into selling, and that certainly takes more than one buyer. Selling needs a seller and a buyer at least, and for an author to be considered a success, the author needs lots of buyers.
Funny then, that even after all that, the creative process still isn’t over.  Just because the book has been written and published, it doesn’t mean the creative process is finished.  Whatever a writer puts on the page, the reader still has to create what they see in their own mind. One person’s sky blue may be cerulean, the next might be azure. It will depend on what they get from the words they read.  It will depend on their perception
The character I write, will not be the character you read, and won’t be the character your best friend sees either.  We all have our own realities and we will each see different things even in the same set of words.  My reality and yours aren’t the same thing.  But none of those realities are wrong. The worlds we create are ours and ours alone, they are precious and they are perfect and we each should strive to create them over and over again.
So the creative process never really ends because it begins all over again with every new reader, and even every new read, as the reader picks up on the nuances unseen on the first run through.
Every writer sows the seed of a new story, a new world.  I’ve planted a few seeds now, why don’t you go see if you want to bring them to life.

When I first started writing and submitting fiction, more than thirty-five years ago, I was only interested in short stories. I tried my hand at a novel, but after writing 10k words (on a manual typewriter) I lost all faith in it and tore it up, frustrated that I could have written a couple of stories in that time. If I'd continued I might have ended up with a novel that would never have seen the light of day as opposed to 20 stories and the hope that at least some of them would have found publication. It's impossible to make a living out of writing short stories, but back then that wasn't the aim; all I wanted was to get some publication credits.

I've written SF, horror, fantasy, crime, Sherlock Holmes tales, Doctor Who stories, and fiction tied to games. There was a time when I was regularly receiving invitations to submit to anthologies and the list of credits grew longer.

Somewhere along the way I started writing longer stuff and took the plunge to give up a day job I was no longer enjoying. I was producing stuff under my own name, in collaboration with others, and as a ghostwriter, but the short stories came along far less frequently. Last year, the only short story I had published was a story that had originally appeared in my collection Always a Dancer & other stories (Fox Spirit 2016). There was plenty of longer stuff, even though my own name didn't appear on much of it, but no new short stories.

This year, things are going to change.

I've challenged myself to write and submit at least one story every month in addition to the other work I already have lined up (and there's plenty of that). I have no intention of writing these stories for nothing, but I'm happy to write for markets that pay at least a token payment plus contributor's print copy if there's a theme that grabs me. If I am fortunate to place any of these stories I'll buy a new piece of art for my office, if I'm not I'll doodle something on a postcard and stick it up on the wall just to remind myself.

I already have a few deadlines pencilled into my diary for anthologies that I'd like to submit to, and if there are any editors who are working on projects this year and would like me to try my hand at something please get in touch.

So why am I telling you this? Well I figured that if I wrote my plan down I would be more likely to stick to it. It would be great if I reached the end of the year in which I celebrate my 60th birthday with enough stories to fill a new collection, even better if some of them had already found homes! I'll try to leave a monthly update to keep you up to date wit how I'm doing.
Posted by Steve at 14:00 No comments: